25 Year Warranty | Shipped from US

Add description and links to your promotion

Very well made. Quality materials. I look forward to my first hike.

I'm loving my new unbreakxble walking staff only been hiking once since I've bought it but I can say it will be helpful for years to come. Shipping on time, great looking,perfect weight and with all the hidden helpful tools this is the perfect companion on any trail 👣.

The Mk 1 staff in general is an excellent purchase for the money. HOWEVER it was not until after I made some comments about adaptions I made after owning the staff for 24 hours, that I was told other options were available.

The first thing I discovered (after a little over a mile of walking with my dog) is that the staff is very uncomfortable to hold due to the sharp edges of the machined surface. (Only AFTER mentioning that I was making a grip cover with a wrist strap was I advised that there is a paracord wrapped segment available). Likewise the tungsten glass breaking point, is rather awkward to keep deployed so I covered it with a crutch foot for better traction, and AFTERWARDS was advised that a "trail foot" attachment was available.

BTW The wrapped grip (using less that 25 cents worth of paracord) costs an additional $41 YES Forty-one dollars for approximately 10 feet of cord. The same for the "trail foot" while the rubberized crutch foot costs $1.99 at Walgreen's.

Both the saw blade "fish spear" and the "scythe" have multiple issues in their design.

Have not tried it out as of yet. Plan on doing some hiking up in Hatcher's this weekend. The stick is nice and hefty, I think it will work out nice on packed down ground, not real sure how the foot will handle the tundra or muskag. We will find out!

The staff is great, well built, sturdy, the accessories, unfortunately are not as well made and are over priced, still, I bought 2 staffs, but I would just buy my own paracord and do my own wrap next time, mine already came loose with little usage

Very happy with this product

I Have as yet to use them, I consider them a bit short for proper use of a walking stick I have ordered two more pieces to make them longer. on a more positive note they did arrive 2-3 days early.

I bought the cane with two extra attachments which is very long. I got the shovel head for go bag. I put this together and for a guy with fusions with rods and bolts in my back it gives me great leverage from a standing position. I’ve seen zero others like this as strong as this.

Very awesome piece I'm glad I purchased it thank you

I have only had it for a week, but very pleased with the whole set up. It does have some weight to it and feels very sturdy. The different tools are easy to find and place where needed. The extension with the wrapping is definitely recommended. Overall very happy with everything so far.

D
Individual Tube with Paracord D.
Great walking stick but so much more

Very impressed with the durability. Love how each tool is hidden inside of the tubes.
I would highly recommend this to everyone 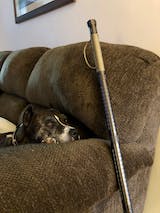 Go for the longest version. I did and it's the perfect length for walking. I'm 6ft. Great system that will stand the test of time and can be adjusted for many uses.